Decisions are based on emotion. We then convince ourselves we have made the right decision using information we are given.

A few years ago, neuroscientist Antonio Damasio made a ground breaking discovery. He studied people with damage in the part of the brain where emotions are generated.  He found that they seemed normal, except that they were not able to feel emotions:

They could describe what they should be doing in logical terms, yet they found it very difficult to make even simple decisions, such as what to eat. Many decisions have pros and cons on both sides—shall I have the chicken or the turkey? With no rational way to decide, these test subjects were unable to arrive at a decision.

The emotional aspect of bids is therefore really important to engage the reader with your project/beneficiaries. The evidence and stats can then be used to help the reader satisfy themselves that your project is one to fund.

So how do you motivate people to give to your cause?

If only there was one golden rule! However some tips that can strengthen your case include:

Give a reason for this change. The word “because” has been shown to significantly alter peoples behaviours. In an experiment, people queuing for a photocopier were asked if they could go in front of the person next in the que. 3 different reasons were given…. 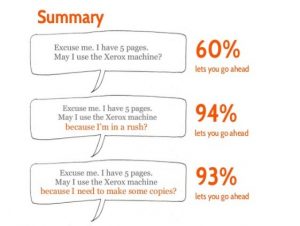 Surprisingly the addition of because made a massive difference even though the reason was pretty useless.

Give credibility to you claim – who else backs you, provide some (not too many) statistics

Cause and Effect – ie if X happen or is done, then Y will happen (or not happen) (Incidentally whether you frame a question positively or negatively can also alter people giving behaviour)

More information on the Psychology of funding in my training course.

For those interested there is a really useful report called Mindscape which looks at factors that influence decisions; these are given practical use in a book called the Nudge Unit.

Also have a look at Thinking; fast and slow by Daniel Kahneman

Any cookies that may not be particularly necessary for the website to function and is used specifically to collect user personal data via analytics, ads, other embedded contents are termed as non-necessary cookies. It is mandatory to procure user consent prior to running these cookies on your website.