All too often organisations invest a lot of resources in making an application for funding scrabbling about for information and evidence to support the bid. The bid often driving the gathering of information. A much more effective approach and one that will bring more success is to focus on the development of the project and overall organisation ensuring it is making and impact and meeting the need of the community. If this is done correctly, then writing applications becomes a lot more straightforward and simpler.

Yes, this can take time initially but in the long term it will improve your funding success. 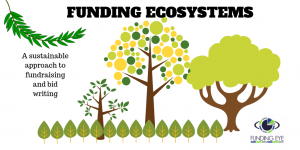 Some previous conservation efforts to protect endangered animals focused purely on the animal at risk, requiring huge resources to project and support them. Despite huge efforts animal numbers often still declined of remained the same. This was due to the many other parts of the ecosystem that were needed to sustain the animals being neglected. It was only when a whole ecosystem approach was taken to maintain the animal’s habitat that numbers were seen to improve.

In much the same way funding can be seen as an ecosystem. The bid writing often being the focus of the funding work, where in fact the real work needs to be in developing the work that supports the bid. And whilst applications can be successful when they are the key focus, they often require a lot more work which needs to be repeated for another application.

If instead a more holistic approach is taken to bid writing then the work becomes a lot easier, quicker and sustainable.

Any cookies that may not be particularly necessary for the website to function and is used specifically to collect user personal data via analytics, ads, other embedded contents are termed as non-necessary cookies. It is mandatory to procure user consent prior to running these cookies on your website.